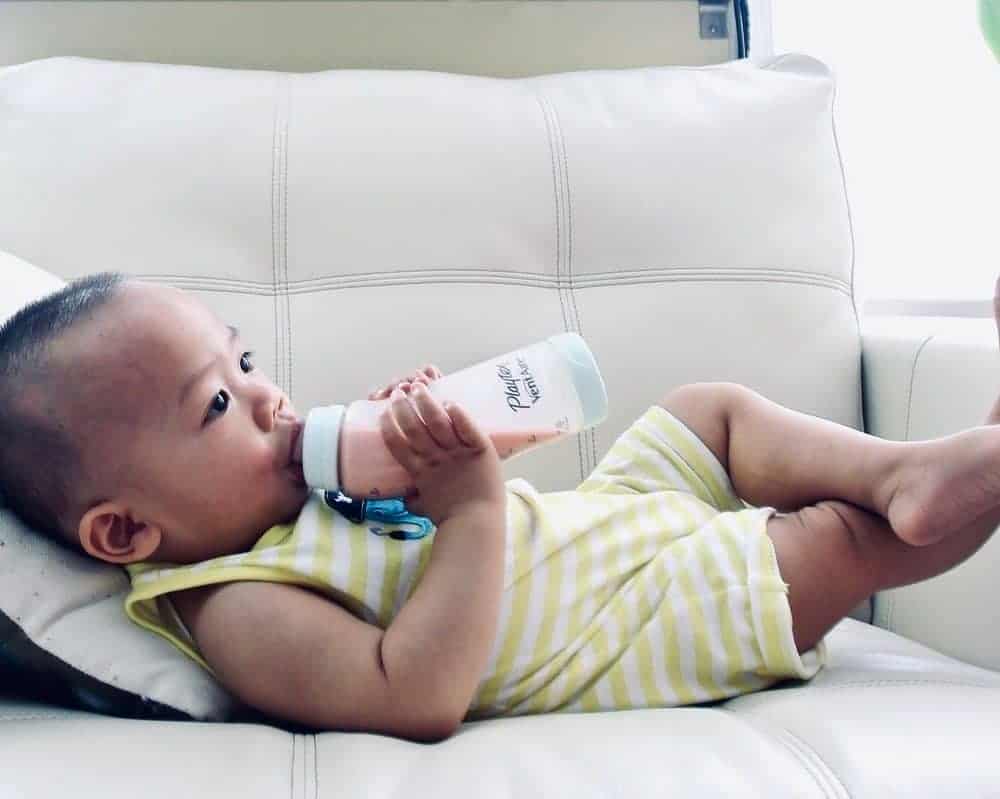 As a vegan parent-to-be looking into feeding options, I came across a ton of information suggesting that soy formula is bad for babies.

Sure, I had planned on breastfeeding, but what if, for one reason or another, it was not possible? Would I be negatively impacting the health of my child by choosing a soy formula?

Luckily, I was able to breastfeed my baby, so this was not a topic that I ended up stressing about while adjusting to motherhood. But this topic has been on the back of my mind so I’m glad to have finally found the time to take a good look at the research.

This article reviews the latest studies to determine whether soy infant formula is a safe choice for vegan babies.

Why is soy formula a popular choice for babies?

For this reason, health organizations typically encourage women to exclusively breastfeed for the first 4-6 months, and continue to do so while introducing solids for at least the first year (1, 2, 3, 4).

However, it’s important to acknowledge that breastfeeding isn’t always feasible. Formula is designed as a suitable alternative and delivers fluid, protein, carbs, fats, vitamins and minerals in ratios appropriate for a baby’s growth and development  (5, 6, 7).

Soy formula is a popular alternative for vegan parents because, aside from its lanolin-sourced vitamin D, it’s exclusively derived from plants. Hence, many vegan parents prefer it for ethical, environmental or health reasons.

Interestingly, soy formula is a popular choice with a proportion of non-vegan parents as well, who opt to use it over cow milk-based formula for medical reasons, allergy or tolerance issues or in the hope of reducing their baby’s risk of disease later in life.

IN SUM – Soy formula provides a suitable alternative in cases in which breastfeeding is not feasible, especially for vegan babies, or those with certain allergies, intolerances or other medical issues.

Is soy formula as good as other types of baby formula?

All baby formulas available on the market are required to go through a thorough regulatory process and meet certain criteria in terms of composition and final nutrient content (8, 9).

This ensures that all baby formulas are equally able to meet the average baby’s nutrition needs, regardless of whether they’re made from soy or cow’s milk.

Please note that cow milk, plant milks or homemade formula aren’t appropriate for babies under the age of one. That’s because they contain a suboptimal ratio of protein, carbs and fat and lack iron and other nutrients important for a baby’s development.

If breastfeeding isn’t feasible, or is stopped before one year of age, infants would benefit from receiving an iron-fortified infant formula until their first birthday.

IN SUM – All baby formulas available on the market undergo a thorough regulatory process that ensures they adequately meet the average baby’s nutrition needs.

This may be a cautious way to ensure that toddlers meet their nutrition needs despite bouts of picky eating.

However, if your child’s overall diet is well-balanced and provides the nutrients found in cow’s milk from other sources, formula may not be necessary until your toddler’s second birthday.

When in doubt, consider discussing your own specific circumstance with a registered dietitian specializing in plant-based diets. If you don’t have easy access to one, feel free to contact me.

IN SUM – Some experts recommend that vegan toddlers continue to drink formula until their second birthday. Discuss what’s best suited for your specific circumstances with a specialized registered dietitian.

Soy baby formula is often the source of controversy and its use tends to raise a few concerns.

Why are people concerned about soy formula?

It’s noteworthy to mention that despite these potentially concerning factors, most studies fail to observe any significant long-term differences in growth, development or overall health between cow milk formula-fed and soy formula-fed babies (12, 13, 14).

Soy is rich in isoflavones, a category of compounds naturally found in beans, including soybeans.

Soy isoflavones are commonly referred to as phytoestrogens, or plant estrogens, because their structure resembles that of the reproductive hormone estrogen, naturally present in the human body.

Due to their similarity in structure, soy isoflavones can attach to estrogen receptors in the body. Because of this, some fear they will cause estrogen-like effects at a time in a baby’s development when exposure to estrogen is typically low.

However, soy isoflavones differ from estrogen in a few ways.

For instance, soy isoflavones are 1,000 to 10,000 times less likely to activate estrogen receptors. That’s in part because they cannot bind to some types of estrogen receptors and must compete with estrogen to actually bind to the others (12, 13).

Therefore, it’s estimated that only 0-3% of a baby’s blood isoflavone levels are actually active (15).

This may explain why soy isoflavones are considered unlikely to have significant estrogen-like effects in humans (12).

Is soy exposure riskier in babies?

In the first few months of life, an infant’s diet relies exclusively on breastmilk or formula. And in most cases, these will continue to make up a big part of a baby’s diets, even as solids begin being introduced.

This means that babies fed with soy formula are typically exposed to larger amounts of soy isoflavones than breastfed babies or those fed formula made from cow’s milk.

Soy formula-fed babies are also likely to consume larger amounts of soy isoflavones than toddlers or adults, who eat soy as part of a more diverse diet (16).

Moreover, infants grow at very fast rates and go through developmental stages that are particularly sensitive to estrogen. Accordingly, some people worry that soy isoflavones may pose a higher risk to babies than to other age groups.

Again, it’s important to keep in mind that soy isoflavones are much less potent than estrogen and that only 0-3% of the circulating isoflavone levels measured in infants fed soy formula are actually active (12, 15).

This may explain why studies typically fail to find any lasting or significant negative effects in adults who were fed soy formula as babies (12, 13, 14).

IN SUM – Soy formula contains higher amounts of aluminum, phytates and isoflavones than breastmilk or cow milk formula. Some worry this may cause reproductive and long-term health problems.

Concerns about the effects of isoflavones on the reproductive health of animals date back more than 50 years ago, when it was first noticed that sheep and cows grazing on red clover — a rich source of isoflavones — were infertile (17, 18).

Since then, several animal studies have researched the effects of isoflavones on reproductive and general health. Here’s a summary of the most prominent concerns raised:

How does animal research apply to humans?

These studies have rightfully sparked debate. Especially given the fact that soy formula-fed infants often have blood isoflavone levels similar to those being linked to negative health effects in animal studies.

That said, it’s important to note that results of animal studies are not easily applicable to human babies, for a number of reasons.

For starters, animals, metabolize isoflavones very differently than humans do. This is even true for monkeys, which most people assume are quite similar to humans (15).

Finally, animals are sometimes exposed to higher doses of soy isoflavones, for longer periods of time or receive isoflavones through intravenous injections, all of which greatly differ from what happens with babies (12, 15).

Therefore, despite what flashy headlines may have you believe, it remains difficult to extrapolate results from animal studies and apply them directly to humans.

IN SUM – Soy isoflavones have been linked to a range of reproductive and health abnormalities in animals. However, results from animal studies are likely not fully applicable to humans.

Despite findings from animal studies, human studies measuring both the short-term and longer-term impact of soy formula generally find little to no negative effects. And, when negative effects are identified, they appear to have a minor significance (12, 26, 27, 28, 29).

For instance, one review spanning studies published up to mid-2013 reports that girls exposed to soy isoflavones during pregnancy and early life may have more breast tissue, get their menses earlier and experience longer and more painful periods (26).

Menses began, on average, only 5 months earlier, lasted only 9 extra hours and period pain was rated as only slightly higher in women who were fed with soy formula as babies.

Similarly, there seems to be little difference between the brain development, growth or immune function of babies fed soy or cow milk formula.

Moreover, although soy formula may interfere with the absorption of thyroid medication, it doesn’t appear to have any negative impact in babies with a healthy thyroid gland (12, 13, 14).

New studies are continuously emerging and a handful of them link soy formula to an increased likelihood of period pains, heavy bleeding, endometriosis or uterine fibroids. However, more studies are needed to confirm these effects (30, 31, 32, 33).

What’s more, a recent study suggests that baby girls fed soy formula in the first 9 months of life may experience changes in vaginal cells and differences in how specific genes get turned on or off when compared to babies fed cow milk formula (34).

However, it remains unclear whether these differences have any short or long-term health effects and more research is needed before strong conclusions can be made.

IN SUM – Soy formula doesn’t appear to negatively impact the growth or development of healthy babies in a significant way. Yet, more research is needed before harmful effects can be definitely excluded.

When should soy formula be avoided?

Soy formula is generally considered a safe choice for most vegan babies.

That said, soy formula may not be the best choice for babies born prematurely, or for those with certain medical conditions, allergies or intolerances (35).

Parents of babies fitting these special cases should seek guidance from their healthcare provider when attempting to choose the baby formula most appropriate for their baby’s needs.

Moreover, although soy formula appears to have no negative effect on babies with a normally functioning thyroid gland, it may reduce the absorption of thyroid hormone medication in those who require it (12, 15, 36).

Thyroid levels can be closely monitored and medication levels adjusted accordingly, even in babies fed with soy formula. However, parents should discuss the feasibility of this option directly with their healthcare provider.

IN SUM – Soy formula is generally considered safe. Parents of babies born prematurely or with certain medical conditions should discuss the formula best suited for their baby with their healthcare provider.

The safety of using soy formula to feed babies is a controversial topic.

That said, soy formula may not be the best choice for premature babies, or those with allergies, intolerances or specific medical conditions.

All-in-all, research is only meant to offer some guidance. As a parent, it remains up to you to weight the pros and cons to reach the decision that best suits your family.

When you’ll be ready to introduce solids, download a free copy of the 76 best first foods for vegan babies below. Then simply pick a food from each category when building your baby’s meals.